The parish church is beautifully situated in a secluded dell by a stream only a mile from the busy A39, six miles south of Bude. The name Poundstock is Saxon and means ‘cattle enclosure’ and the cattle pound was a feature of the village for centuries.

From time immemorial a fair was held at Poundstock on Rogation Monday, and the revel or Dedication Festival is still observed on that day, the Monday before Ascension Day.

The parish has had a colourful history: the Archbishop of Canterbury came to the parish in 1282, after the Rector of Morwenstow had seized the church and installed his own man as incumbent. No sooner had the Archbishop departed than his candidate was evicted.

In 1357, at a time of bitter rivalry amongst robbers and pirates in the area, the assistant curate, William Penfound, was hacked to death before the altar, and it is said that his ghost may still be seen.

The church has some interesting historic features. A ancient wall painting on the north wall shows the Seven deadly sins, a very fragmentary St Michael weighing the souls with the Virgin Mary interceding by dropping her rosary beads in the scale pan (over north door) and a Warning to Sabbath Breakers or Sunday Christ. The message of the last was ‘Don’t work on Sunday’. Work tools are shown inflicting extra wounds on Christ.

A section of the original rood screen with saints – St Philip, St Bartholomew, St Matthias, St Blaise , St Sitha, St Luke and St Apollonia acts as a reredos behind a small altar on the North wall whilst recycled screen tracery survives with a few bench ends.

The 1540s-50s Gildhouse is acknowledged as Cornwall’s best preserved church house, possibly that of the whole country having just received an international award. This lies at the bottom of the graveyard and was where ale was brewed and cakes baked for parish feasts, held in the large upper hall. Profits went to the church. At the Southern end of its great hall is a 1638 plaster Royal coat of arms originally removed to here from the church. This church house was being build at the time of the Prayer Book rebellion the catholic vicar of Poundstock at that time, Simon Morton, being one of the rebel leaders hanged in 1549. 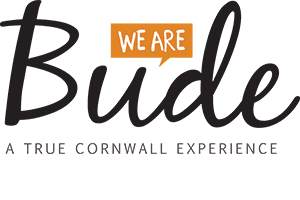 Powered by Convert Plus
This site uses cookies: Find out more.